Sep 03 Posted by etedprince in Technology 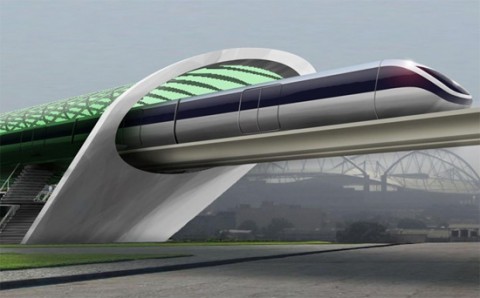 Hmmm, no car drivers these days, so why not no wheels too?

You can’t open any paper, blog or tweet these days without hearing about self-driving cars. Frankly I’m getting bored. How about something new for once?

How about wheels? Wheels are terribly old-fashioned. They weigh a lot, cost a lot, need a heavy car to ride on, are very hard to stop and need heavy brakes that keep on needing replacement. What’s not to hate? Let’s talk about them for a change!

It’s pretty clear that wheels are ripe for replacement, a disruption waiting to happen. They are way beyond their past-due date. The question is what is their replacement?

Actually the answer is staring us in the face. That disruptor-in-chief, Elon Musk has already invented it. It’s the Hyperloop. And actually he didn’t really invent it coz the Hyperloop is really a souped-up maglev (magnetic levitation) train. They have e been around for yonks. Of course, it’s also linked to a linear motor for propulsion, but that’s been around for a long time too.

You can view the wheel-less car as a loopless Hyperloop. It’s got the magnetic levitation and linear motor in the one shell but there’s no evacuated tube to slow it down. Neat.

So what, I hear you say. How can a car with no wheels get anywhere if it needs anti-magnetic rails underneath it so it can move? My answer: why can’t we build roads with the necessary electrics already embedded when you build them initially? With a bit of smart electronics you could make sure the vehicles riding above can only ride in certain locations, either through having physical or electric guides. I think Elon Musk could think that one up pretty quickly.

We could then call it maglev for the masses or MagM. Instead of a latter-day Orient Express that only the well-heeled can afford, we could have MagM for the Great Unwashed. Put them on the top deck, so to speak. Spread the wealth around a little.

Did you see that the powers-that-be have just come out with an announcement that they want to build a maglev railway between Washington DC and Baltimore? Of course, like all railroads it will lose money. Why not make it a maglev road instead? The masses could then use it, and their wheel-less pods will run free on power from the road, instead of being onboard. Zero emissions, ultra-low carbon. Let’s stop climate change in its (maglev) tracks (so to speak)!

OK so a wheel-less car, ho-hum. Seen it all before (kind of). How does it make a difference to my life?

There’s a lot of gloom out there. Rising inequality, declining global growth, slowing populations, wars everywhere, ISIS, disaffected youth, terrorism, etc. etc. The only way to combat all of this dysfunction is a huge spurt in global growth that lifts all boats, not just a few. So we need something to get that all going. It’s gotta be big, it’s gotta be different and its gotta be really disruptive.

In another post (“Space will be the New Driver of Global Economic Growth”) I’ve suggested that this spurt is going to come from space exploration, and in another post (“Noah’s Ark on a stick is how we get to the stars – soon”) maybe even stellar exploration. But maybe the wheel-less car revolution is going to be the initial driver that’s going to get this growth spurt going.

How so? Well if we really want the self-driving revolution to succeed we have to make it cheap as well as safe. The way to do this would be to have roads that make it almost cost-free to be transported anywhere. That means not just self-driving cars, but a cost of transportation an order of magnitude less than we have today with gas or even electric cars. We can do that by removing tires. But you have to have special roads.

So, you might say, who’s going to pay for that? Well, that’s what we did in the early age of the car. Remember the only ways cars could be successful is if you had asphalt roads for them to run on, otherwise they couldn’t go fast enough to make them really worthwhile. We often forget that what made the auto worthwhile and effective was not just the technology of the internal combustion engine, but the infrastructure to allow them to drive fast and freely, namely paved roads.

Road infrastructure is now so 19th century. Current roads are an obsolete technology with their disruption waiting to happen, just like wheels on cars. The next big revolution has to be no wheels but that will also need a wholesale change of roads and road technology. That means roads that are built embedded with maglev (or something similar) so that any auto can travel on it a cost dramatically less than that today, dramatically faster, and dramatically safer. That means no wheels.

The opening up of the US was driven by rail – maglev without the mag. The second opening up was with roads, rails without the limitations of rail. The third wave is going to be wheel-less roads, MagM.

Just like the first two transportation revolutions, this will prompt another opening up. It will be wholesale transportation on a gargantuan scale. That will require massive investment, massive employment of people both with advanced skills and without them.

So that’s my favorite candidate for the next global growth revolution. You can view the Hyperloops as the first, visionary but still hesitant step. For once, at least on this issue, Elon Musk is behind the curve.

Knowing him he, or someone else, will jump ahead of it pretty soon.