There’s a way to solve the health problem of living alone!

Jan 05 Posted by etedprince in Health 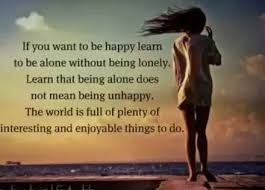 You might have associated UK Prime Minister Teresa May with BREXIT. But she has another distinction. She appointed the first Minister for Loneliness ever in the UK early in 2018. At the time I thought it was a weird idea. That shows you how little I know.

The current fashionable buzz is about living alone and loneliness. The concern is that living alone is a huge health risk. (“The Loneliest Generation: Americans, More Than Ever, Are Aging Alone”). People who live alone are more likely to have health problems, these will cost more to address, and they won’t live as long. The health costs of living alone are not as great as having diabetes but they’re more than having arthritis.

And in case you believe that loneliness only strikes old people, think again. Actually there are 3 loneliness peaks in most people’s lives  - late 20s, mid-50s and the late 80s. So, if you’ve already been there, too bad, you’re gonna go there again, probably. At least on this telling. Bad news all around, right?

For the moment let’s accept that living alone and loneliness are the same thing. We’ll tackle the precise distinction later. Is being alone the problem now that it used to be for our parents?

As per usual, I’ve got some questions. Here’s the nub of them. With all this social media around, doesn’t that change the equation? What if I’m obsessively on social media all day every day chatting with my friends. Does this count as being lonely, even if I live alone?

You’ve only got to look at Facebook to see the scale of the issue. Billions of people are online constantly chatting with their friends. How many of them would we count as being lonely or alone who actually are living, in their own view, a thriving social life, even if they do in fact live alone?

How about online gaming? My son does it all the time. He is an only child in the house but is frequently online, playing games with people all over the world. He sure doesn’t look or act lonely to me. A survey analyst might say he is isolated, but he himself wouldn’t. How many hundreds of millions of people does that include?

How about video chat? If I am video chatting with my kids and family frequently when they live all over the world, am I alone and do I feel lonely when I see them even more than if we lived in the same town or neighborhood? In video I have meaningful interactions modulated with facial expressions and body language. The only thing I don’t do is touch them. Would I touch them anyway if we were meeting in-person?

Recently I posted on what I called “smellies” – movies that allow you to smell digitally within an immersive experience (“Does nose breathing enhance cognitive performance?”). If in the future I can even smell someone I am video chatting with, can that really be said to be akin to being alone?

What about when virtual sex arrives, probably soon. If I have virtual sex with someone, even though I live apart from them and am alone in my house, am I truly alone and do I feel lonely?

And now we have Alexa. My wife already talks to Alexa even when I am around. She probably chats with Alexa even when I am not there. Is that being alone? Was Theodore “alone” when he had his virtual relationship with Samantha in the move “Her”? Did he feel alone even though he lived alone? It sure didn’t look that way to me.

If I have video, the feelies (courtesy of Aldous Huxley), smellies, virtual reality (including virtual sex) all curated by some good AI, am I really living on my own even if no-one lives with me? Can I abolish loneliness by being immersed in social media? Is truly living alone about to become extinct? If so, will true loneliness also go the way of the dodo?

Some might object that you can still be alone and lonely if you only interact with one person at a time. But if I have remote cameras in my abode, and I know that I am being watched by others, will I feel alone and act as if I am lonely?

The trend in technology and society is towards more digital interaction with our friends. Those interactions are inevitably going to become ever-deeper. AI is going to provide even more immersion and to deepen the quality of our online social interactions. What happens when Alexa is The Her for everyman and everywoman?

So, here’s my suggestion.

How about an Alexa for seniors? It is designed to chat to anyone who lives alone or even those who are not living alone but are lonely. We’re almost there now with digital assistants, chatbots and the Turing test competitors. There’s actually two devices, Senora and Senor Alexa, natch, for Him and Her.

Senor and Senora Alexa are trained to talk specially to seniors who are living on their own, although they can be used for people who are not senior who still feel lonely.

There’s a Senor or Senora/Senor in every room.

Your own Senor/Senora is linked to all your social media accounts so that you can tell her to get someone to talk to “Hey, Senora, can you please get me my buddy Joe for me to talk to. We can do this be video or VR today, I’m decent right now!”

Senora and Senor are integrated with a 3D camera to keep an eye on you and your well-being. They are especially trained to detect the sound of a fall or to someone crying out that they are in trouble. If they detect that they instantly call several points – policy, ambulance, friends, family, social workers – to inform them of the emergency and to summon them to help.

They can actually take the initiative if they feel you haven’t been socially involved for too long: “Hi Jane, I took the liberty to call your two children, they’re online and waiting right now. Can I link them in? They’re on video, both looking gorgeous today!”

And “Help, help quickly Senora, I’ve fallen down and I can’t get up!”

Senora: I’ve already sent an alert and help will be here in around 2 minutes”

You get the idea.

Why the hell not!

If we’ve collectively got the wherewithal to create stunningly realistic video games where people get blasted to pieces every single second, why can’t we address a massive social problem that’s probably going to happen to many of us sooner or later?