Are dynasties the future of democracy? 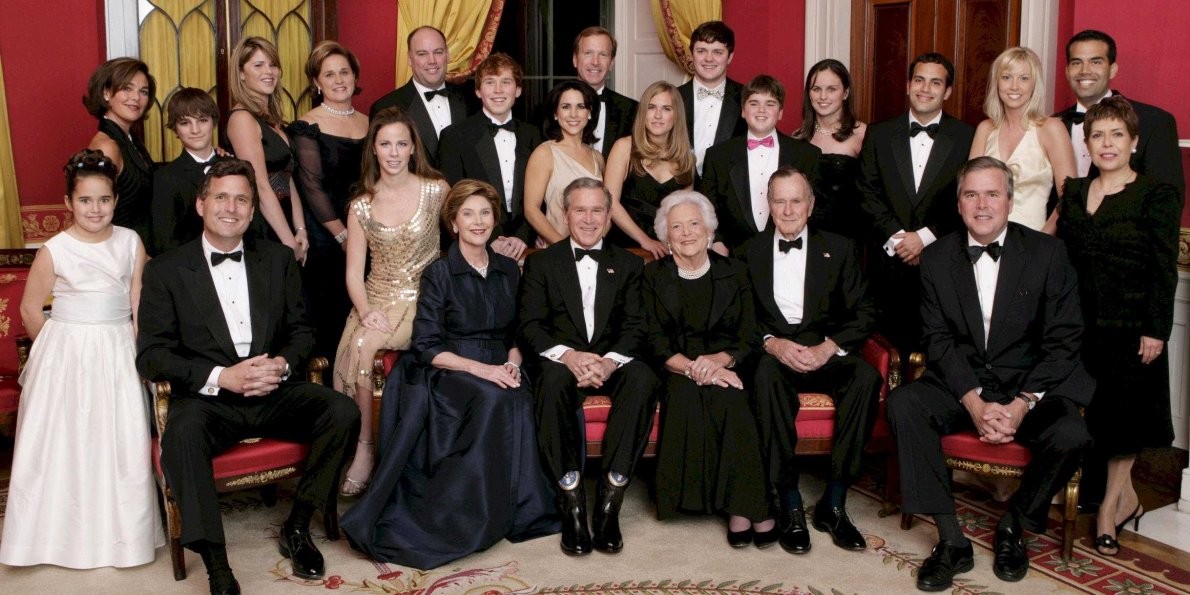 So I know I don’t have to remind you that we have a family running the US of A. Let’s say that it continues, with or without a gap between other family members also getting into the saddle. That’s what a dynasty is, in both cases.

And this is hardly new. In modern times we’ve had the Kennedys, the Bushes and the Clintons. The Roosevelts before that. And of course, we’re not just talking about the President himself. We’re also talking about their siblings, relatives, their friends and relatives.

You might think we’re talking just about the families that capture the White House. Nope. Since the founding of the Republic, there have been over 400 parent-child rulers in Congress. So family dynasties can capture not just the Executive, but also the legislative arms.

Neither are we talking just about the Feds. There’s a book yet to be written on the chokehold just a few families have over the politics of many States. The Federal arena attracts the attention but a lot of what really matters goes on below the radar in the States. Surprisingly, analysts and the media haven’t really cottoned on to that particular little issue.

Dynasties are big business. There seem to be more dynastic families now than ever before. And they come from both sides of the aisle. So no political favorites here.

So you can’t blame Trump; we the people have voted for these dynasties and put them atop the gilded throne. Party politics don’t come into it.

We tend to conflate dynasties with the Chinese, who have had them for more than 2000 years. But they seem to be coming back.

For a start the new Chinese rulers are also from a dynasty, albeit well-hidden. Modern Chinese leaders tend to come from just a few families who have all intermarried. Xi Jinping, the current leader, is just the current incarnation.

We all know that North Korea is a dynasty. But so too is South Korea, the recently-deposed President being part of a ruling family and the daughter of a President

In Eastern Europe the tradition continued with the Tusks. In Hungary we have Victor Orban and his family, looking very similar to the Trumps. In Poland it’s Jarosław Kaczyński and his family; he is widely seen as a promoting conspiracy theories against immigrants, another similarity to the sitting US President.

Most of the ‘Stans are ruled by dynasties, including Kazakhstan, and Uzbekistan. In India there’s the Gandhis, the Bhuttos in Pakistan. The list goes on (see the article in the Economist from 2015).

So is there something going on here? After all, families have always been dominant in politics. So what if a few dominate things in a number (ok, well a lot) of countries?

Well we’re supposed to love democracy. If wealthy families effectively take over the running of most countries, then we don’t really have it; at least not in the classical (Lockian) form.

Once you get a family in power there’s strong reasons for it to want to hang on. First of all, it can continue to enrich itself by having privileged access to the levers of power. It can fiddle with these to ensure it hangs on.

And in some countries the dynasty has no choice. If the leaders leave power, nasty things would happen to them. North Korea is an obvious example but there are plenty of others.

In his controversial book, ‘The Economics of Inequality,’ French economist Thomas Piketty provides evidence that modern societies are getting less rather than more equal. Research into inequality seems to show that it is increasing in the US and many other countries (including China) but in Europe it’s still declining.

But even in Europe the jury is still out. There is an increasing trend towards family dynasties there, just as in the US and many other countries. More inequality puts power into the hands of the richest people who are the only ones who can raise the money to campaign for the vote. These are the richest families.

In other words, it might well be that increasing income inequality fuels the move towards political systems becoming less democratic and more dynastic with ever fewer ruling families running the show. This seems to have been happening since the end of World War 2.

Have we passed Peak Democracy? Are family dynasties the wave of the future?

In the US at least, so it seems. We stand as a harbinger for much of the world.

Should we ban dynasties? For example, make it illegal for a family member to follow another family member in certain (all?) political or elective posts? It’s draconian but institutionalized family dynasties might be even worse.

Family dynasties are the canary in the coal-mine for the fading out of true democracy. We’re probably well on the way, even if we’re not quite there yet.

Quantum is the new digital
Do trees have brains?