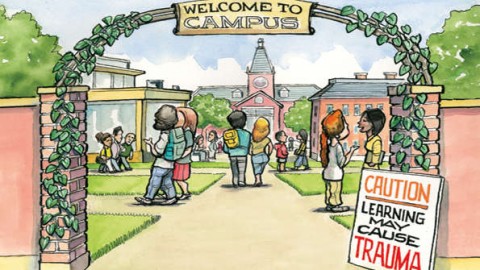 So I’m sure you’ve heard about the MOOCs – massively open online courses? There’s a bunch of them now like Udacity and Coursera. Many universities are adding new online course offerings powered by them. So the MOOCs are already doing a little to disrupt the university scene. But so far they haven’t had a fundamental impact, notwithstanding recent moves by many universities to add cheaper online course offerings are a papyrus in the breeze (get it?). Just to mention a couple:

So universities, like everything else, are on the verge of massive disruption too. What’s that going to look like? The conventional view is that it’s going to lead to more students and thus more revenues, even if course prices go down somewhat. But we are already seeing collateral damage – namely the demise of many smaller universities and liberal arts colleges. We’ve already seen several of them go under. The academic Walmarts are starting to put the mom-and-pop institutions out of business. But that, it seems to me, the just the beginning of much larger changes.

The software for managing interactive sessions within courses is now so good that it can simulate class discussions in many ways better than the real thing. So now it’s no longer that the MOOCs just handle display and presentation. They are bringing real-life interaction to classes. It doesn’t matter if you have 50 people in a class, 500, or even a million. That upends the economics and possibilities for higher education.

And that’s now. The MOOC movement is only in its infancy. Think about the possibilities with virtual reality. The IoT. And so forth.

Right now it’s the universities that, in the main, have been using the MOOCs to change their products and the way they are delivered. But why are universities managing this at all? If I have MOOC software, can’t a bunch of professors go off and do their own thing? Couldn’t they get the best 500 professors in the world across all the disciplines and then form an online-only university that could have potentially 10 million students? And if so, couldn’t the cost of a degree be reduced to the same cost as a monthly lawn-moving service? Think what that would do to the economics of higher education.

Could said professors actually form a cooperative in which students can also be members? So that the students could ultimately own the professors? Could these academic coop memberships then be traded like any old stock or security? And then the security would give us an actual market measure of the true worth of the university and its professors? Something that we really don’t get now?

It seems to me that MOOCs will lead to the securitization of higher education. Then they will become markets in their own right with the coop universities being ranked by their stock prices rather than the highly biased and inexperienced opinions of students and faculty that purport to show how universities should be ranked?

In this securitized market for college instructors, it will be teaching rather than research that gets brownie points for professors. So in the new academic cooperatives research will be devalued or even eliminated. That might be bad socially but it’s where the money is.

Teaching universities will still grant PhDs but they won’t be research degrees. It will be advanced coursework all graded by computers. The undergraduate courses will increasingly be soft, liberal arts subjects and will attract an increasing share of all students. There will be a declining number of courses and students in the hard sciences, engineering and the practical disciplines. They will increasingly be places of entertainment rather than places of learning as the teaching universities aim to please and cajole more students to enroll.

Many – most? - of the research universities will go out of business and the teaching universities will probably be the sole survivors. Their professors will be promoters and marketers rather than knowledge-seekers. They will be ultra-mega all-online universities with no face-to face contact whatsoever between professors and students, a secular equivalent of the mega-churches.Their goal will be to maximize student numbers and the stock price of the university cooperative rather than the advancement of knowledge and turning out good citizens.

This might seem to be a dystopian vision of higher education, universities and professors. But it’s probably where the university market was moving in any case. It’s just that the MOOCs have radically accelerated these trends.

So yes, research universities are going to go obsolete with the exception of a few Ivy League institutions. Teaching universities as such will also be obsolete. The resulting teaching university product will not be education in the traditional sense but edutainment for the masses with much lower educational quality if any at all.

Deal with it. Your kids will love it.

Was Darwin wrong? Why it matters
Being overweight is not your fault – and how to cu...